Skip to content
Home
/
Military Order of The Crusades 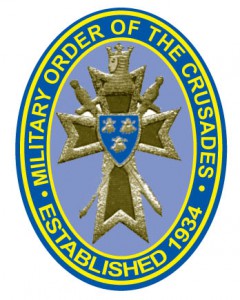 The Military Order of The Crusades (MOC) was founded 15 August 1934 by a patriotic cadre of men whose dedication was, much the same as the framers of the Constitution of the United States, to the principle of doing the right thing regardless of risk, cost, obstacles or hardship. The focus of MOC is to honor and perpetuate the memory of their brave ancestors, their ideals and achievements as well as to support and encourage activities of noble purpose.

The membership is comprised of individuals, male and female, of proven lineal descent from one or more Crusaders of Knightly or Higher Rank who participated in one or more of the regular and/or interim Crusades between 1096 and 1291 and who made great personal sacrifices, endured great hardship, performed heroically, and died in great numbers during the Crusades. The term “Crusade” continues to be given to any campaign, activity or movement which the participants believe to be for an important and worthy cause, and which is conducted with force, determination and dedication. All Crusaders gave up lives of ease, luxury, prominence and power for hardship privation, and peril.

Many of the most important affairs of present modern civilization have been strongly influenced by the great human achievements of the Crusaders such as the termination of the Dark Ages in Western Europe and the subsequent gradual evolution into a Revival spreading around the world from Western Europe and ultimately to a highly developed form in the United States of America.

MOC and Baronial Order of Magna Charta (BOMC – which base purpose is to promulgate the freedom of man under the rule of law) are closely related in that both organizations commemorate great human achievements, contemporary in time, whose effects for good to this day strongly influence the world condition. Many of the twenty-five Magna Charta Sureties were Crusaders, and consequently many of the members of MOC are members of BOMC and vice versa. MOC is an unincorporated not-for-profit organization within the umbrella of BOMC.  The Baronial Order of Magna Charta and The Military Order of the Crusades have proven that it is possible for societies with related backgrounds to merge for their mutual benefit.

The Order meets two times each year — at a Breakfast Meeting in Washington, DC during “Hereditary Week” each April and again in the fall.