The Remarkable Life of William Marshal, the Power Behind Five English Thrones 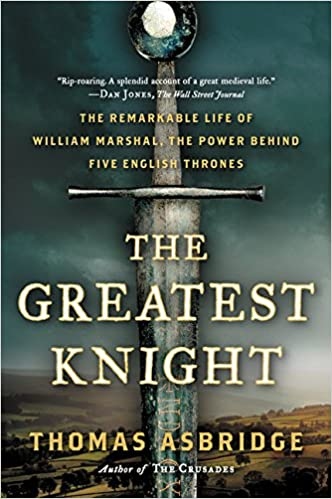 If there is a single historical figure to capture the imagination of members of Baronial Order of Magna Charta, Military Order of the Crusades and Descendants of Templar Knights, it is William Marshal. However, this book is much more than a biography of Marshal’s storied career. It is a breathtaking historical narrative spanning just shy of 100 years and providing insight to the culture and politics of medieval Europe, the development of chivalry and tournaments, the conduct of warfare and the relationship of church and state, including the crusades, and culminating in Magna Carta.

In 1152, at age five, Marshal was condemned to death by King Stephen of England. William was a hostage who was about to pay for his father’s betrayal of the king. Luckily for England, his life was ultimately spared and thus began William’s rise from humble beginnings to the most powerful Earl in England. As the second born son of a noble family, William made his own way into the world. Armed with only his name and a distant familial connection, he began training with the Norman noble William of Tancarville. During these formative years Marshal acquired equestrian and martial skills that would ensure his survival and propel him to the notice of the likes of Eleanor of Aquitaine.

Under the rule of Henry II, the 12th century Angevin Empire extended from the borders of Scotland to Spain. Without a capital, the king constantly traveled from on area to another, administering justice, quelling uprisings, while also defending territorial integrity from external threats, mainly from Flanders or France. With this backdrop William attempted to establish his reputation. However, being a knight was expensive, and while a patron may support his knights with funding and equipment, chances in peacetime to become “known” and achieve upward mobility were scarce.

It was from this situation that tournaments were born: the opportunity to practice warfare within guidelines. Originally tournaments included hundreds of knights traversing miles of terrain. These were dangerous affairs, both bodily and financially. Knights who were captured often forfeited horses and equipment or paid a ransom. To the victor, came glory and to the loser, potential ruin. As a tournament competitor Marshal become one of the most celebrated knights on the circuit, garnering a position with Queen Eleanor of Aquitaine’s household.

William soon found himself known to the king. While Henry II was a strategic thinker who carefully maintained Angevin strength; he was also unwilling to share power with his four surviving sons, all of whom at some point would be his heir. This led them, beginning with “Young King Henry”, to rebel. In one of his first tests, Marshal was assigned by Henry II to train and advise the young king. When Young Henry rebelled, Marshal remained with him in opposition to Henry II. Later, after the young king died unexpectedly, Marshal was accepted back into Henry II’s good graces. In keeping his promise to fulfill young Henry’s crusader vow, Marshal journeyed to the Holy Land. Little is known of the two years William spent in Palestine, though he was likely there in the last throws of the First Kingdom of Jerusalem. It was during this period Marshal made a commitment to the Temple Order and upon his return to England actively supported its efforts. William would eventually die a member of the order.

Once back in England, Marshal again dealt with rebellion. This time he protected Henry II from capture by his son Richard the Lionheart. If not for William’s decision to lower his lance and impale Richard’s horse instead of the prince, history may have taken a different turn. Later, when Henry II died, the kingdom was in disarray. In consolidating power Richard, now king, used his office to reward reliable, trustworthy advisors; Marshal being among them. Richard also kept his father’s promise to William, by arranging Marshal’s marriage to Isabel of Clare. In a single stroke, Marshal became Lord of Striguil. Marshal and King Richard successfully campaigned together against the French to restore the Angevin Empire. Such was the rapport between Richard and William, that when the later subsequently organized the Third Crusade, he entrusted England to William’s safe keeping.

Enter John “Lackland”. Ever the opportunist, John attempted to assume power while his brother Richard was away on crusade. In fact, while the king was being held for ransom in Austria, John lied, stating that Richard was dead. To curry favor, John also signed a pact with the king of France, essentially giving away most of the European holdings. When Richard returned, he was now faced with reconquering lost territory. Indeed, while laying siege to Châlus castle, he was mortally wounded by a crossbow bolt strike that became infected. William buried yet another King.

Finally, as John came to the throne, Marshal found himself at the mercy of the king’s mercurial temper and erratic behavior. Largely ostracized at the court, Marshal maintained his bearing and as the barons began to revolt John found few friends. John asked for Marshal’s help. Only William had the respect of both sides of the conflict and found himself in the role of mediator, ultimately serving as a surety of Magna Carta. Though John was quick to renege on his promise, France attempted to exploit the troubles by launching an invasion of Britain. When John passed away at Newark, his kingdom was diminished, the land in revolt and the French occupied London.

Incredibly William Marshal was left as the defender of the realm, as John’s son Henry III was only age nine when he assumed the throne. With Prince Louis of France and many English barons attempting to conquer the country, Marshal was outnumbered. However, his bold and unexpected action in the Battle of Lincoln turned the tide and was quickly followed by the destruction of the French fleet in the naval battle of Sandwich, resulting in the restoration of Henry’s right to rule.

William Marshal served the crown through seven decades. He was steadfast in his responsibilities, loyal to his office and his men. While he, as much as anyone, established the behavior which we now ascribe to chivalry, William was also a man who, through his own merit, rose from obscurity to the pinnacle of power. Yet he never forfeited honor for power or condescended to palace intrigue. He was in every sense the greatest knight. This book is a must read for any member of our society.