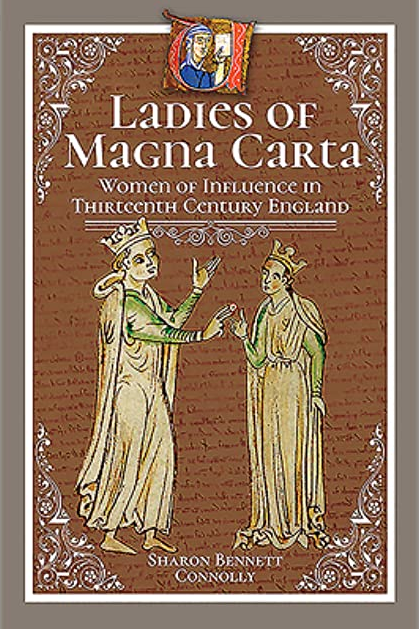 For those who take a special interest in learning about a scarcely documented yet essential aspect of medieval history, Sharon Bennett Connolly is an author of choice.  She has written several non-fiction books: Heroines of the Medieval World, Silk and the Sword: The Women of the Norman Conquest and recently, Ladies of Magna Carta: Women of Influence in Thirteenth Century England.

Baronial Oder of Magna Charta (BOMC) readers will enjoy the way in which the author constructed the book, beginning with a highly informative chapter:” King John’s Path to the Throne”.  While sympathy for John is quite challenging, one does get a better understanding of his formative years and relationship to his family, especially to his brother Richard the Lionheart, father King Henry II and mother Eleanor of Aquitaine.

With the stage set, Connolly takes us through the events leading to Magna Carta and, along the way, John’s marriages: first to Isabella of Gloucester and, second, to Isabelle d’Angoulême.  Upon assuming the throne, King John is in constant strife with King Philip August of France.  The everchanging alliances, through both war and marriage create a dynamic backdrop for understanding the role that women played during this moment of history.

Connally highlights the lives of over 18 women, who are placed in the context of Magna Carta, the men under whose authority they lived or to whom they were married. So it is here that we find stories of survival, betrayal, injustice and, occasionally, triumph. For some women, Magna Carta itself was the result of their mistreatment, for others it was a lifeline, while ironically for those of noble birth it was ignored. To the extent that the book is somewhat redundant in the retelling of historical events, it assists in making sense of the tangled web of familial connections and the complex relationship between titles and holdings, on both the Continent and in England; many of which change due to the fortunes of war or the whim of the king.

Among the stark facts in Ladies of Magna Carta is that marriage was seldom about love; rather, it was about increasing power and influence, through the elevation of social status and gaining wealth. While men, like Earl William Marshal, had the advantage of feats of arms to climb the social ladder, women were often directed to marriages without recourse. Indeed, vast age difference between bride and groom are startling to imagine by today’s standards.

One of the more impactful elements of Magna Carta was Clause 8:

“No widow shall be compelled to marry so long as she wishes to live without a husband, provided that she gives security that she will not marry without our consent if she holds of us or without the consent of the lord of whom she holds, if she holds another.”

For women, especially the ones who were married and widowed young, Clause 8 provided newfound freedom and the ability to control status and property in their own right. This was the case for Isabel De Warenne who at age 8, married Hugh d’Aubigny 12 years here senior, only to be widowed by age 17. Thanks to Magna Carta, Isabel remained single and succeeded in protecting most of her property, albeit not without having to challenge King Henry III face to face.

Other women proved especially effective in political negotiation and in supporting their husband’s interest. Joan, Lady of Wales, and illegitimate daughter of King John was married to Llywelyn ap Iorwerth, prince of Gwynedd (aka Llywelyn the Great). Throughout the turmoil of the Baron’s War followed by threats from France, Joan was able to maintain a largely peaceful relationship between Wales and both Kings John and Henry III of England to the benefit of both nations. Though her reputation was damaged by an exposed liaison with William de Braose, Joan overcame her indiscretion and the hanging of William De Braose, to see her son, Dafydd, marry de Braose’s daughter (and granddaughter of William Marshal), Isabella.

Some women’s tragic stories will be familiar: the unjust imprisonment and starvation of Matilda de Braose along with her son, for example. Less known, perhaps, is the essentially lifelong confinement of King John’s niece and potential heir to the throne, Eleanor of Brittany. She was the daughter of Henry II and Eleanor of Aquitaine’s fourth son, Geoffrey, and brother to Arthur who rebelled against King John. (Later Arthur would be killed, possibly by John’s own hands.) As a result of this succession threat John, and later Henry III, kept Eleanor imprisoned in various locations from age 19 to 57, eventually dying in Bristol Castle.

On a happier note, we find women like Nicholaa de Haye, who staunchly defended Lincoln Castle, buying time for William Marshal to attack and defeat the French Army in the decisive Second Battle of Lincoln and thus saving Henry III’s throne. Ela of Salisbury also used Magna Carta’s Clause 8 to avoid marriage after the supposed death of her husband William Longespée. As it turned out, William survived a shipwreck, recovered, but died shortly upon his return. Ela, now a widow, never remarried, maintained a goodly part of her holdings, and assumed the responsibilities of her late husband including that of Sheriff of Wiltshire. She and her husband co-founded Salisbury Cathedral and later she founded Lacock Priory and became its first Abbess when it was elevated to a priory.

The stories of these women and the others who played a role in the history of this tumultuous period is marvelously fascinating.  Together, they bring a much richer understanding and missing dimension to Magna Carta histories than we have previously known. Sharon Bennet Connolly is a gifted storyteller, able to relate the women’s narrative to Magna Charta, as well as general historical events. This is an excellent book to expand our understanding of Magna Carta, the events surrounding its creation and especially the women whose lives helped shape or were impacted by it.

By Stuart A. Whitehead

Sharon Bennett Connolly has a blog: www.historytheinterestingbits.com which includes information about many historical topics, her books and reviews of other publications.  Her next book Warenne: The Earls of Surrey from the Conquest to 1347 will be released in 2021.

Her books are available from Amazon and publisher Pen and Sword History (July 28, 2020)